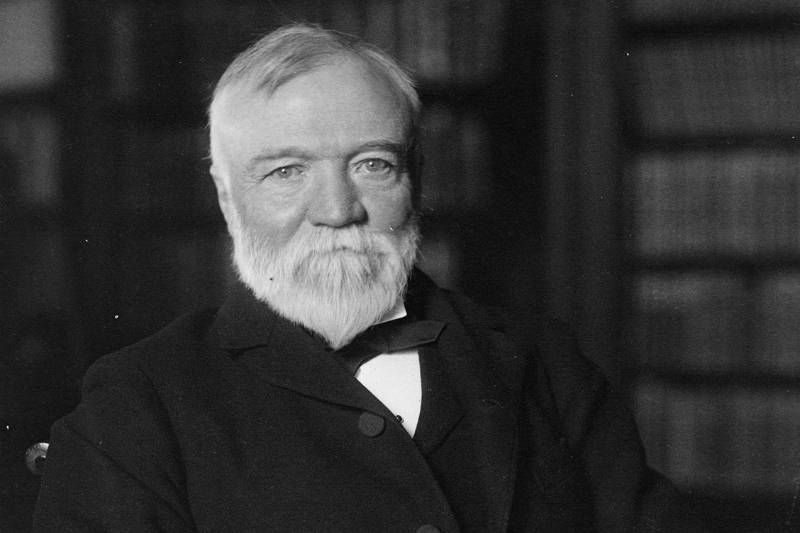 One hundred years ago, on 11 August 1919, Andrew Carnegie died at the age of 83 at his home Shadowbrook in Lenox, Massachusetts. Born in 1835 in the Scottish town of Dunfermline into relative poverty, Andrew emigrated to America with his family in 1848 and rose from the position of bobbin boy in a textile factory earning $1.20 a week to head of Carnegie Steel, becoming one of the richest men in history. Reports suggest that – adjusting inflation – Carnegie’s peak net worth would be valued at around $309 billion today. He was not only one of the most successful industrialists of the Gilded Age, however. He was also one of history’s greatest philanthropists.

In 1868 Andrew wrote that “the man who dies thus rich dies disgraced.” His dictum was that one should spend the first third of their life being educated, the next third making money and the final third giving it all away. By the time he died in 1919, Andrew had distributed over 90% of his personal fortune. There had been philanthropists before Carnegie, but no-one had ever systematically given away their entire fortune on anywhere near the scale that he did.

Andrew had been born in Scotland but made his fortune in America and he loved both nations equally – he even flew a dual-sided flag with the Union Jack on one side and the Stars and Stripes on the other. Andrew and his wife Louise had a home in New York, and they holidayed in Scotland each summer. After their daughter Margaret was born in 1897, however, they decided to buy a property in Scotland so that she would grow up feeling just as at home in Scotland as she did in the US. 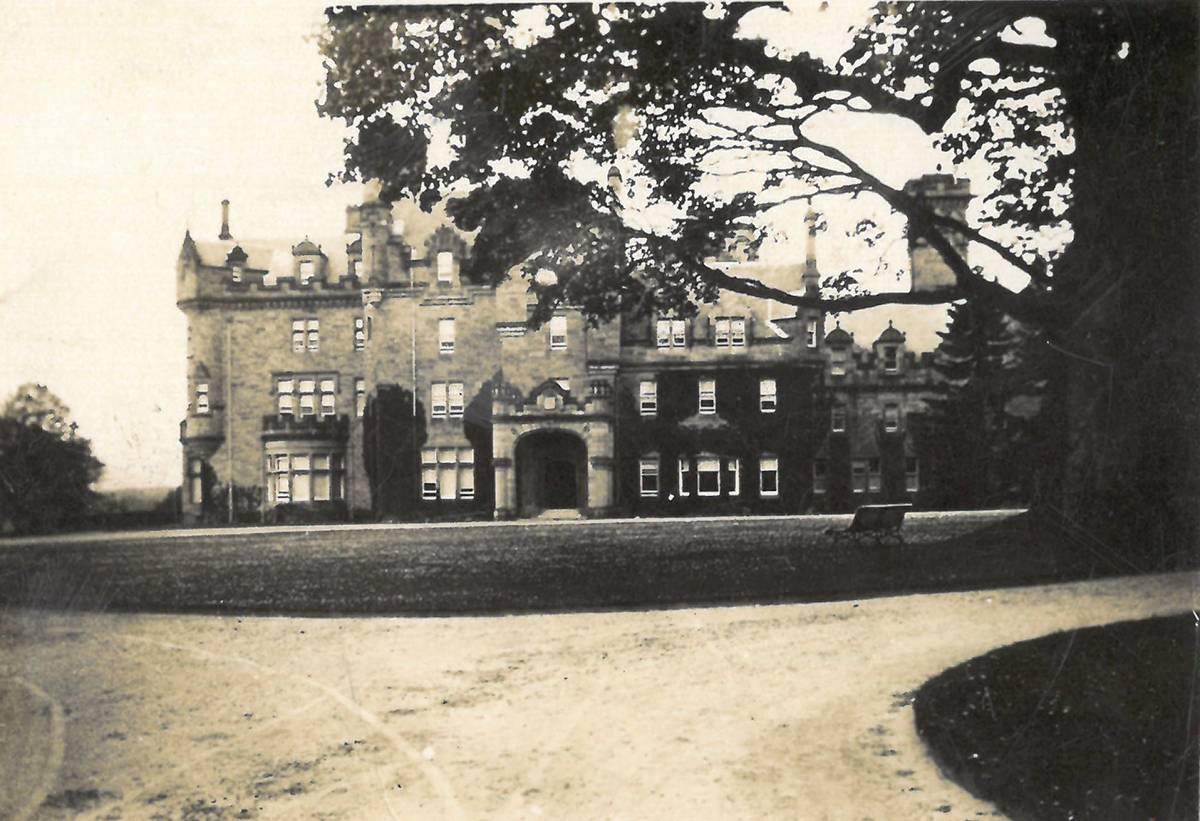 It was this decision that brought the family to Skibo in 1898. From then on, they split their time between their New York mansion and Skibo Castle, usually arriving in the Highlands at the end of May and departing at the end of September. Aside from a few weeks when the family would escape to the calm of one of the estate’s hunting lodges, for most of the summer they would host a never-ending house party.

While at Skibo, guests followed the daily routine: woken early each morning by the resident bagpiper, they would enjoy breakfast in the breakfast room before availing themselves of the estate’s many attractions like swimming or golfing. If the weather was good and their host was willing, guests might find themselves accompanying Carnegie to the Shin Falls for a spot of salmon fishing, or on a jaunt on his steam yacht the Sea Breeze. Each evening, a constantly rotating assortment of faces sat around the enormous oak table in the dining room. 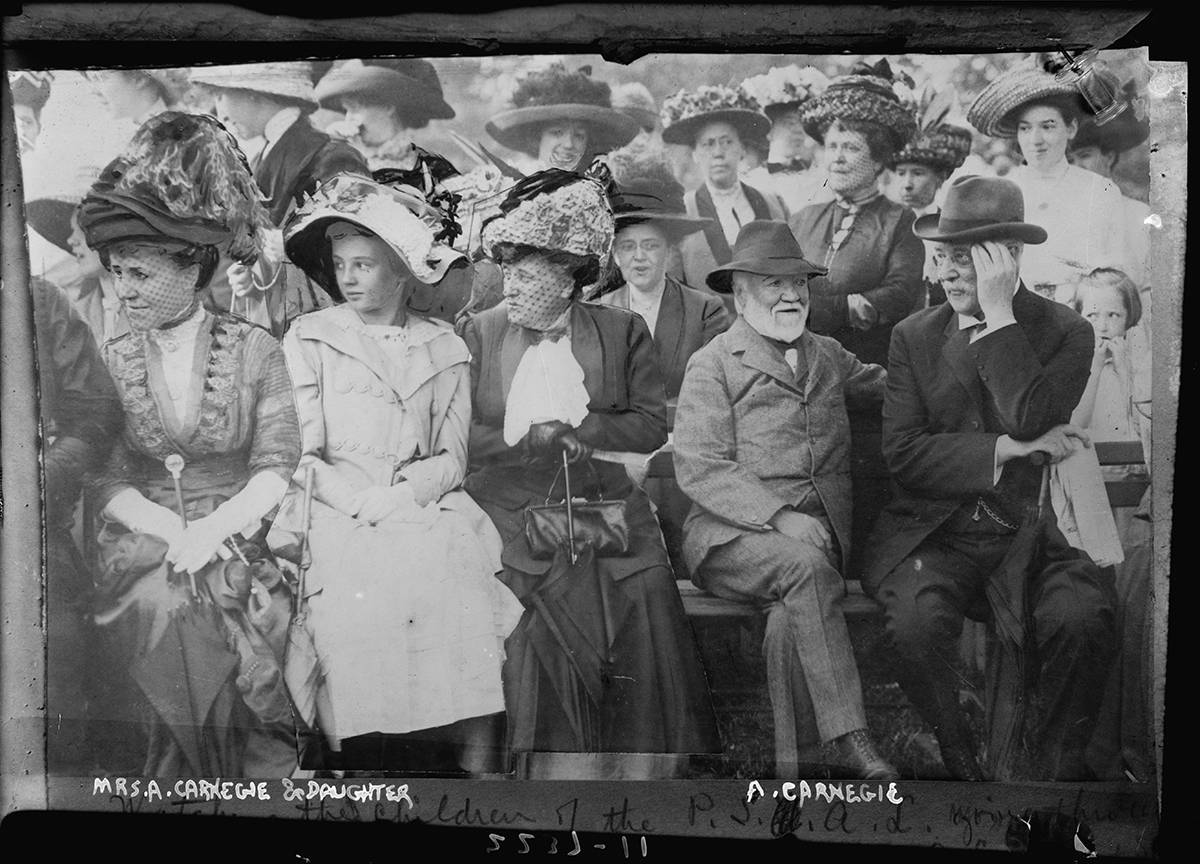 But while Skibo Castle welcomed a veritable ‘Who’s Who’ of Edwardian society each summer, it was at its heart a family home - a place where each summer Andrew could spend time with his beloved wife Louise and their daughter, Margaret. Skibo was, according to Andrew, ‘Heaven on Earth’, and his time there precious. The Carnegie family was on the estate when war was declared in August 1914. When Andrew left Skibo for New York that September, he had no idea that he would never again return.

The Great War kept Andrew from Skibo for four years, but even after the Armistice he was prevented from travelling back to Scotland due to his declining health and he realised that he would never return to his beloved Highland estate. When Louise told him in 1918 she hoped that “next year” they could visit Skibo, Andrew replied “there won’t be a next year for me.”1 Andrew Carnegie died of pneumonia on 11 August 1919, aged 83 at Shadowbrook with Louise by his side. 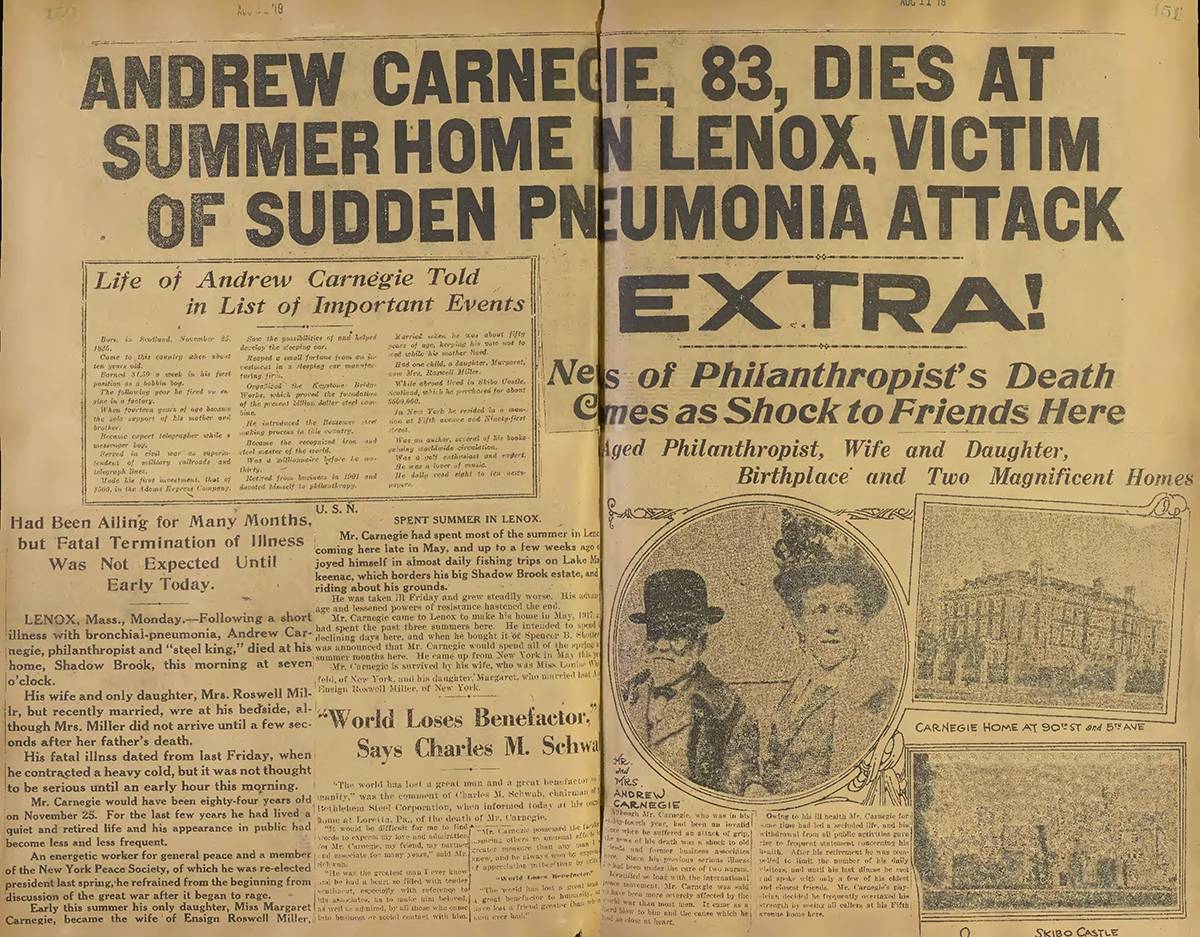 Coverage of Andrew Carnegie’s death in The Evening Telegraph, just one of many newspaper clippings collated by The Carnegie Corporation of New York in a scrapbook in 1919, now digitised by Columbia University Libraries and uploaded to the Internet Archive

As the world mourned the loss of one of the greatest philanthropists it had ever seen, with newspapers devoting page after page to the life and death of Andrew Carnegie, Louise received messages of condolence from figures including King George V and Queen Mary, US President Woodrow Wilson, King Albert I of Belgium, and French President Raymond Poincaré.

Amongst the hundreds of messages sent to Louise by monarchs and heads of state, business associates, friends and neighbours, was a telegram sent from Skibo by Estate Factor James Hardie. Records at Skibo Castle reveal that the telegram, addressed to Louise, read: “In September 1913 Mr Carnegie gave me the following instructions to be cabled to you vis: Let me implore you to follow your own wishes as to my final resting place. My only wish is we lie side by side.”2

Between Andrew giving this last message to James in 1913 and his death in 1919, however, the question of where he would be buried had been settled: Louise had purchased a burial plot at Sleepy Hollow Cemetery, Tarrytown, for the pair.

“Even though by 1919 this final message had been made redundant, it is still significant,” says Carnegie Club Archivist Dr Victoria Connor. “It’s an incredibly touching message. Andrew was twenty years older than his wife, and he knew he would almost certainly predecease her. With this in mind, he tried to lessen the burden that would inevitably be placed on Louise. Andrew’s primary concern was to try to relieve at least some of the pressure that she would be under in the days following his passing. He wanted her to know that whatever decisions she made regarding the burial were hers and hers alone. All that mattered to Andrew was that they would be together in death just as they had been in life, and that is testament to the deep love and respect he had for Louise.”

The telegram - which also reveals that Andrew had left two letters in the care of James, to be sent to Louise in the event of his death and which the Factor related that he “mailed today by express as [Andrew] requested” - was discovered in the records in the castle’s library by Carnegie Club Chairman Peter Crome. “When I first came to Skibo, I read through every one of the Factor’s letter books from that period that I could, and unearthed all manner of fascinating insights including this last message to Louise. Reading Andrew’s final words to his wife was very moving.”

Skibo records also show that on the 18th August James sent a wreath south by rail to be shipped to America.3 This wreath of heather would not reach Louise until 19th September. The next day, she “motored to Sleepy Hollow and placed it on Andrew’s grave.”4 For Andrew’s gravestone, stone was hewn from a quarry on the Skibo estate and sent by rail to George Henry Paulin ARSA at his studio in Glasgow.5 It was then sculpted into a Celtic cross and sent to the US where it was erected in the Carnegie family plot.

One hundred years after his death, the legacy of Andrew Carnegie lives on in the many trusts and foundations that he endowed. Today at Skibo, Andrew’s dual-sided flag still flies, in honour of the castle’s most famous former proprietor, while in the family plot at Sleepy Hollow cemetery a piece of Skibo watches over Andrew and Louise who lie together in eternity just as Andrew had wished – side by side. 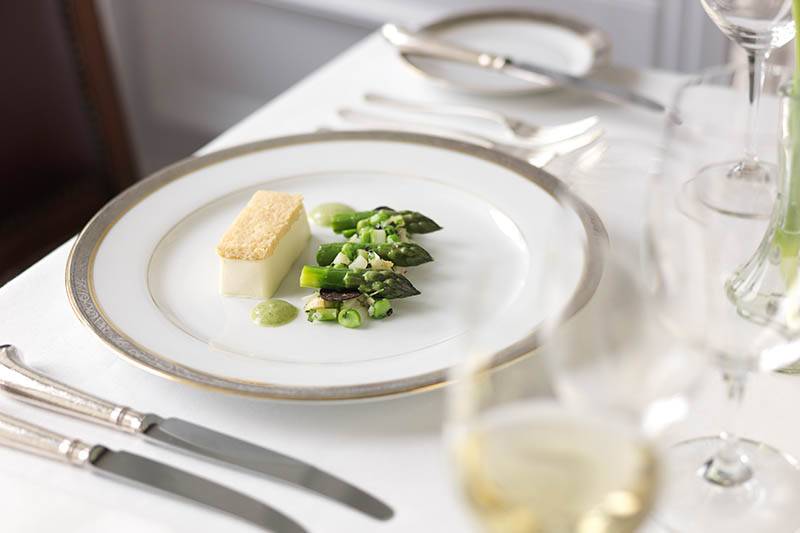 A Taste of Skibo

Home-grown and locally sourced ingredients are at the heart of the delicious dishes enjoyed by guests at The Carnegie Club. Discover more about the field-to-fork philosophy at Skibo, and the delicious seasonal menus served up by the club’s chefs. 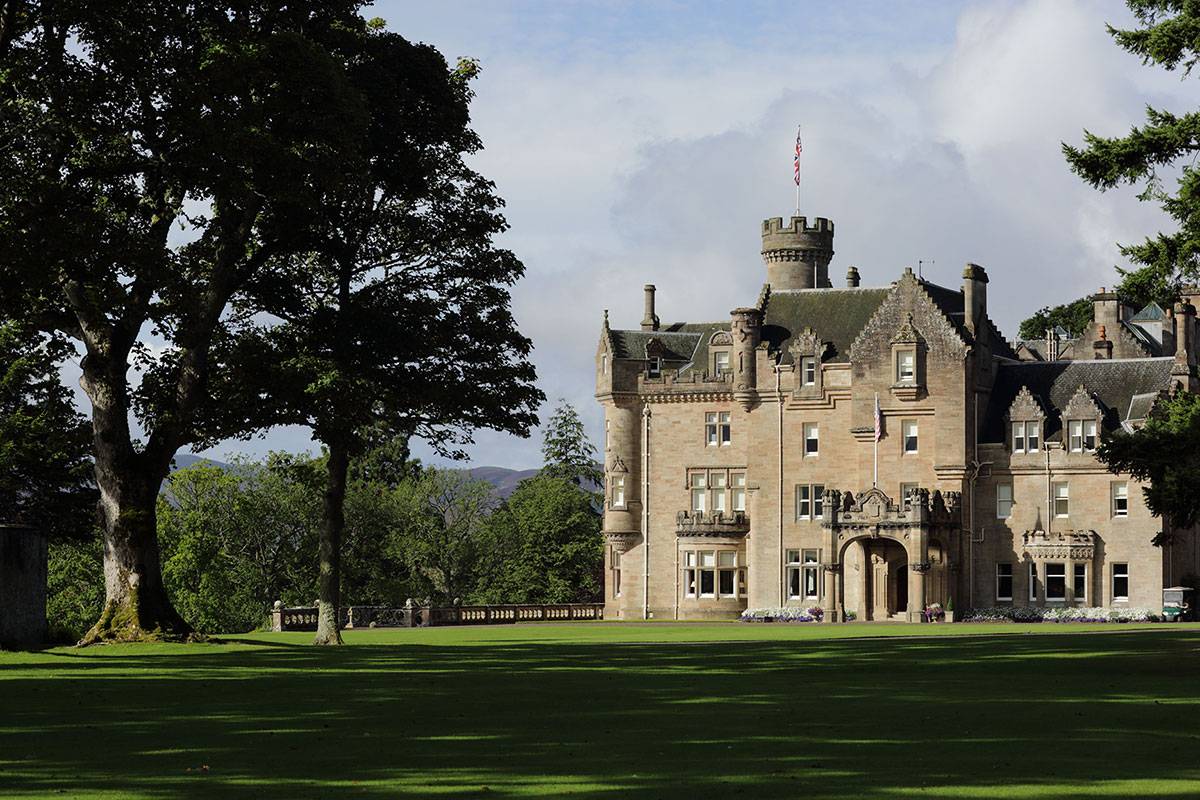 “The world is your oyster”: Careers in Luxury Hospitality

The Carnegie Club at Skibo Castle is one of the world’s most prestigious private members’ clubs. While the historic setting, beautiful surroundings, luxurious amenities, exceptional food and wines, and the incredible range of activities on offer are an integral part of its appeal, it is the seamless service from the team that works at the club who make the Skibo experience so special for members.