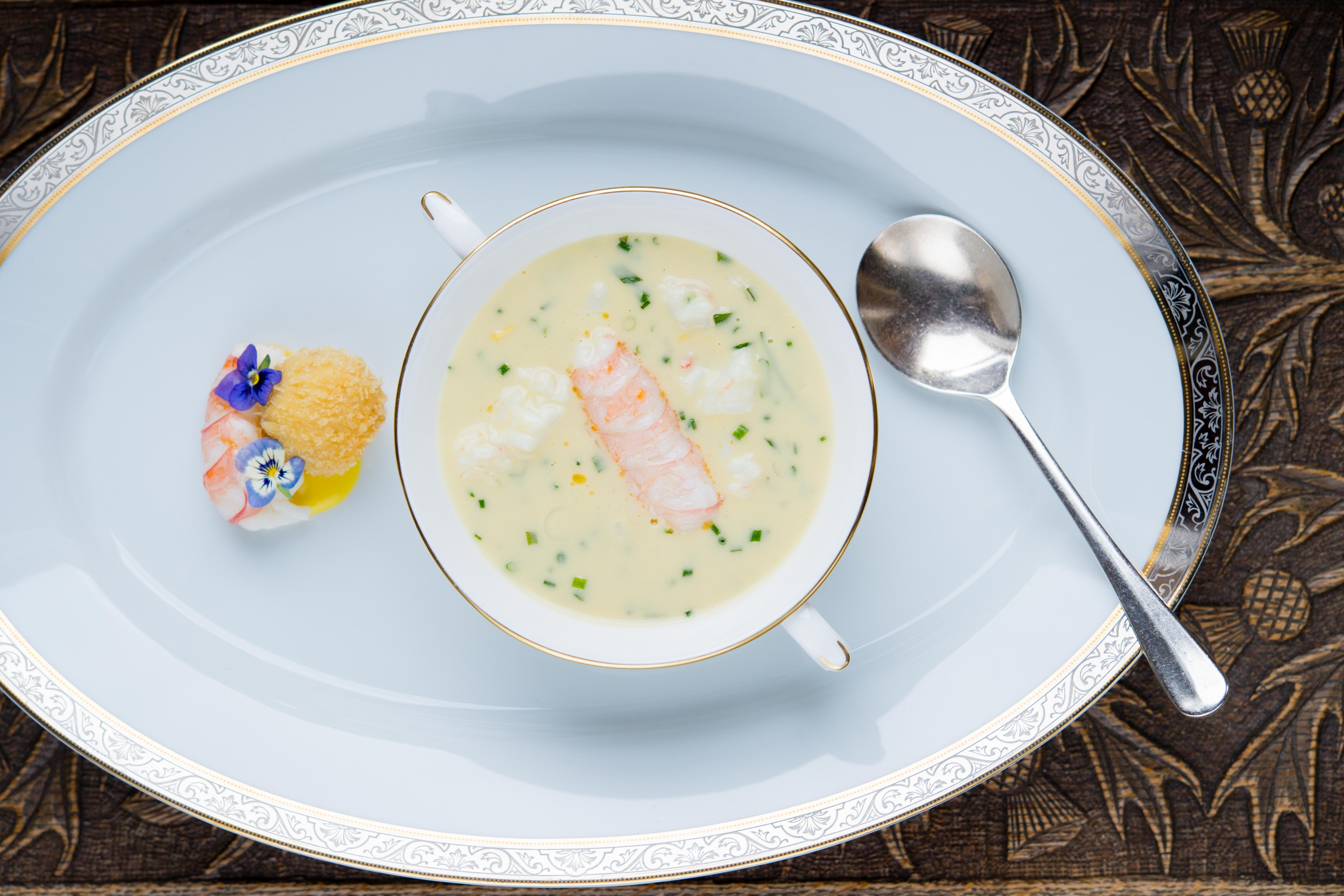 Mainland Scotland has over 6,000 miles of coastline, and if you include its many islands then that rises to over 10,000 miles. Between the clear coastal waters and the country's hundreds of freshwater lochs and rivers, it is little wonder that its seafood has long been a national staple and is renowned the world over its exceptional quality. At The Carnegie Club, a field-to-fork philosophy means that the Skibo chefs prioritise home-grown and locally sourced ingredients. Executive Chef Craig Rowland says, "we are very privileged to have Scotland's natural larder on our doorstop. The Highlands and Islands offer us an incredible range of ingredients to choose from, and the regions fish and shellfish really are the jewel in its epicurean crown."

All of the seafood served at Skibo is sourced from the Highlands and Islands, often from small family-run businesses like the lobsters which come from Jim 'the lobster' in Portmahomack, less than seventeen miles from the estate. Castle Head Chef, Lindsay Mackay, says "we have extremely close relationships with our fishermen, and personally visit them all to see how they harvest their shellfish. Guests are increasingly interested in the provenance of what they are eating, and it's only by going out on the boats that you can really get an understanding of the quality fishing that goes on in local waters." 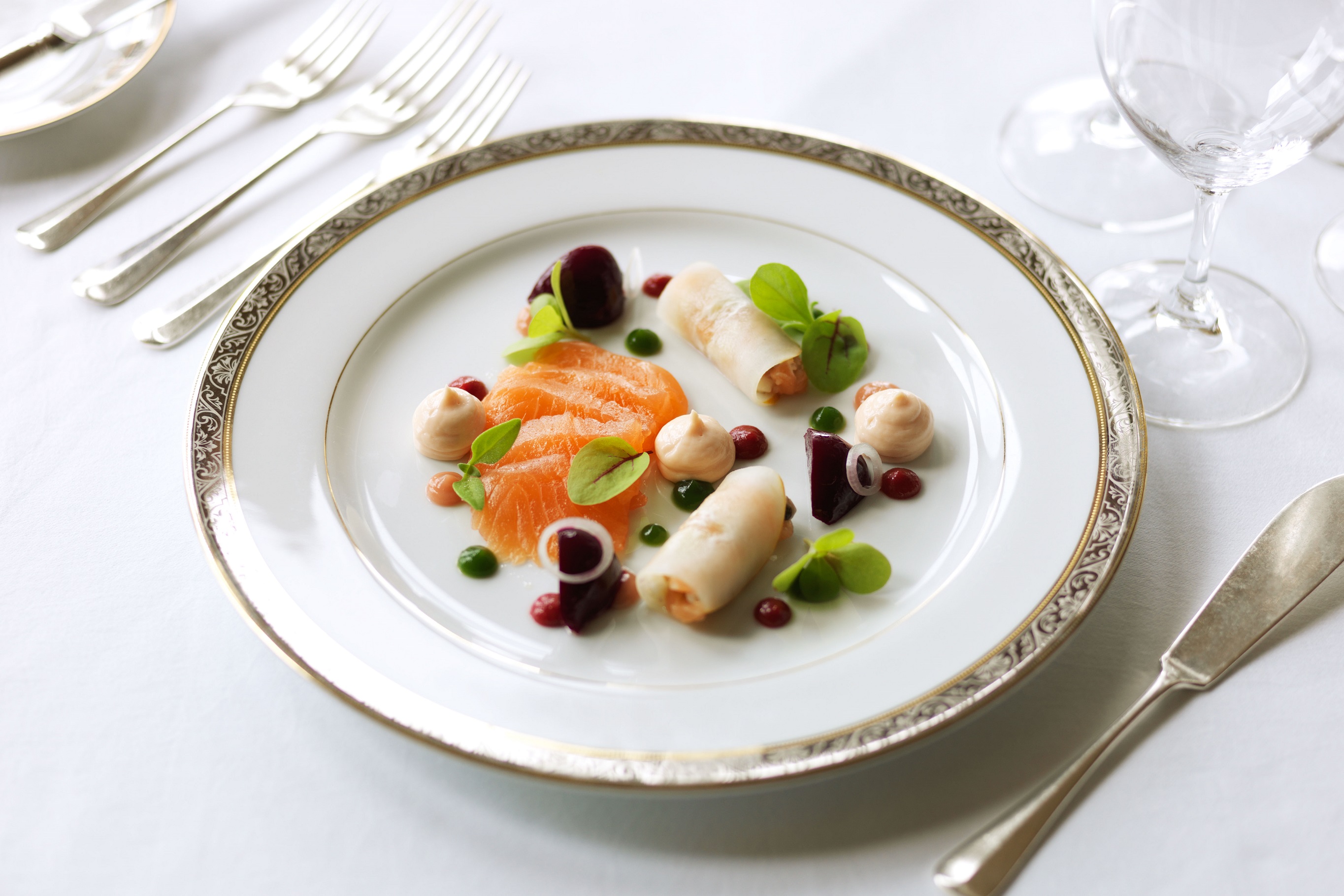 Salmon is the quintessentially Scottish ingredient and the UK's top food export, with 94,300 tonnes shipped across the globe last year alone.1 The salmon served at Skibo comes from Loch Duart on the West Coast. The fish there have much more space than conventionally farmed salmon thanks to the low density of stock, and their diet is as close to that of wild salmon as possible. Craig says, "the salmon have to work very hard there because of the turbulent waters, so it's a leaner fish." This quality of life is reflected in the quality of the fish, and in its flavour. The chefs cure the sides of salmon in Skibo's own Glasshouse Gin (distilled exclusively for The Carnegie Club by Dunnet Bay Distillers in Thurso).

Smoked salmon served at the club comes from Ritchie's of Rothesay on the Isle of Bute, who have been smoking fish since 1888. The company smokes salmon in their historic Barr kiln (which is now over 130 years old) using wood shavings and sawdust from oak whisky casks for a distinctive flavour, creating what Craig describes as "the best smoked salmon I've ever tasted." 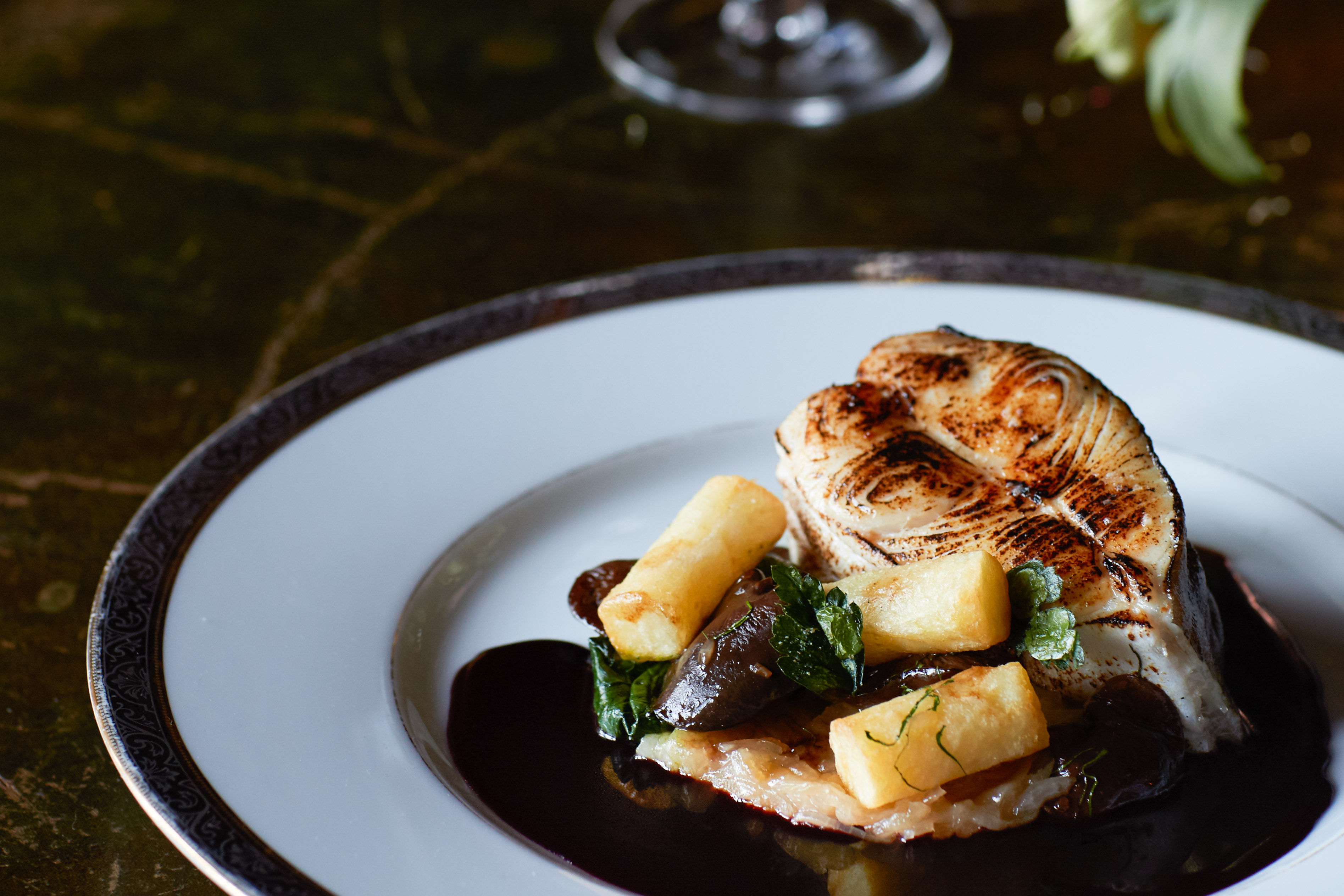 Salmon is far from the only fish that can be found in Scottish waters, and  so – depending on the season and what the local fishermen have landed that day – guests might enjoy Isle of Gigha halibut with langoustine, beetroot and citrus, escalope of Orkney brill with jersey royals, Skibo garden peas and caviar, or native red fish with sautéed Moray Firth squid, dressed heritage tomatoes and harissa aioli. 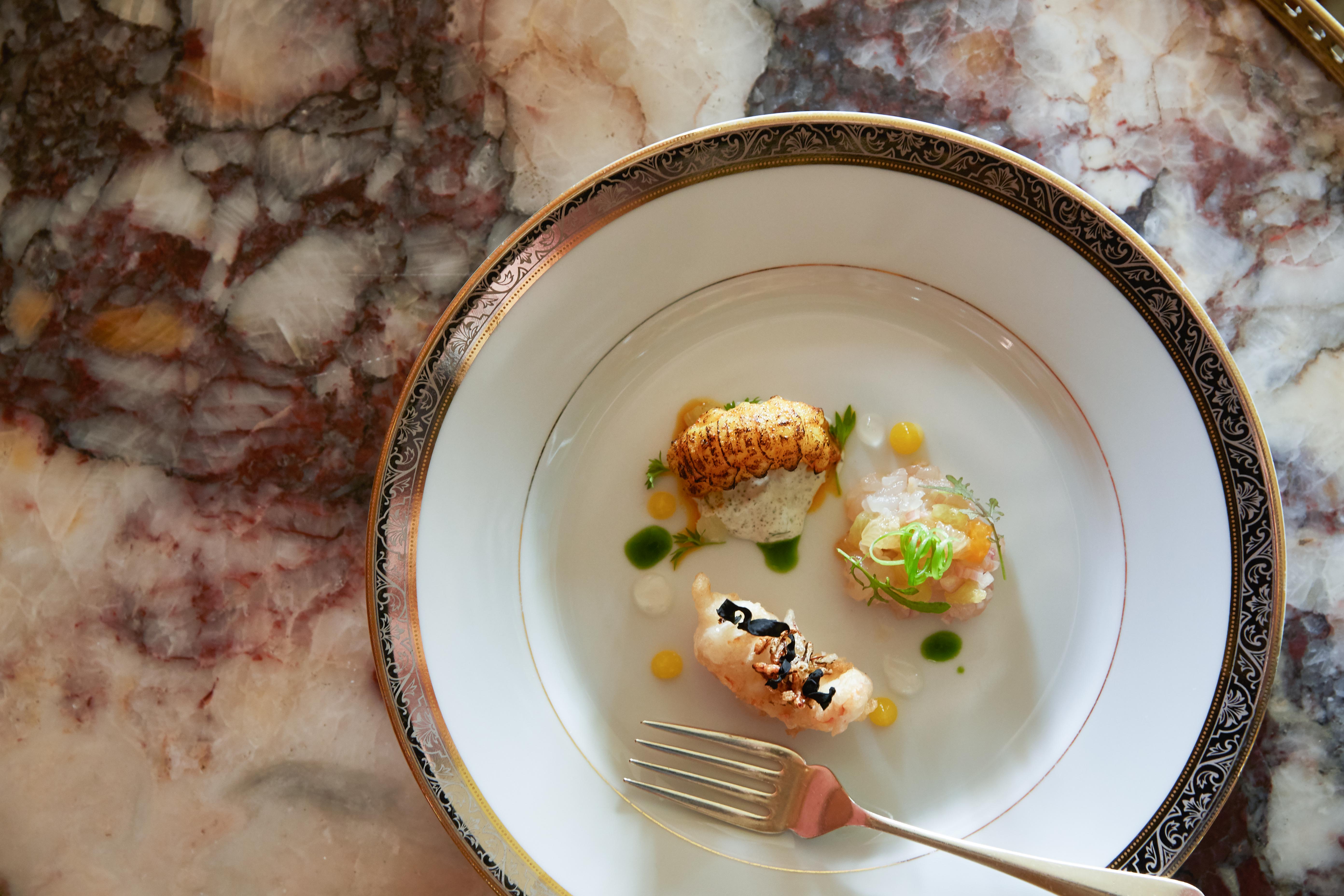 Two-thirds of the world’s langoustines are sourced in Scotland.[1] It is no wonder, then, that these crustaceans appear frequently on the Skibo menu. Langoustines served at the club come from Sutherland Game & Shellfish in Shinness, whose small boats work the waters of Scourie, Ullapool and Loch Eriboll. Company director Brian Macleay says: “All our langoustines are creel-caught: this is a traditional method of fishing which uses baited creels under the sea to catch langoustines that are fully grown. This allows smaller creatures to escape or be released for future preservation of the fishing grounds.” 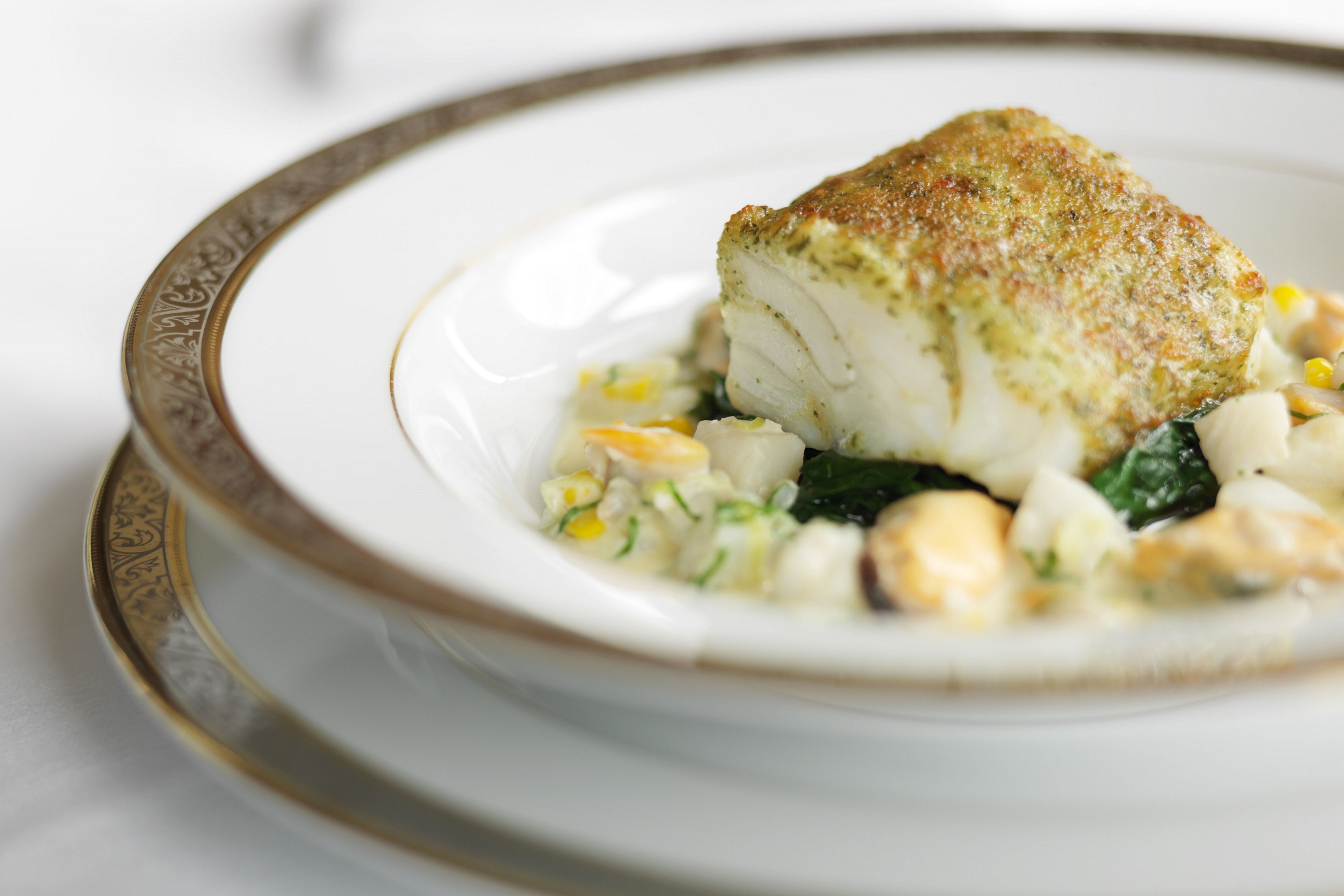 Bacon and maple infused cod with mussels, with ragout of salsify, chive oil and hispi cabbage

Mussels come from Seaspray in the Shetland Islands, where the naturally pristine environment is ideal for the molluscs to develop and grow as Mother Nature intended. Seaspray managing director Jim Tait says: “Shetland waters are virtually unpolluted, and because we farm from class-A sites our mussels don’t have to go through a purification process before sale.” Four boats run by the same Shetland family harvest mussels from small-scale farms, where they are rope-grown. Mussels grown in Shetland are seasonal, which ensures they have time to grow after spawning. “There’s a season for a reason,” Jim says. “We don’t harvest our mussels between early June and mid-August, because during this time mussels rest after naturally spawning, to enable them to put weight back on.” 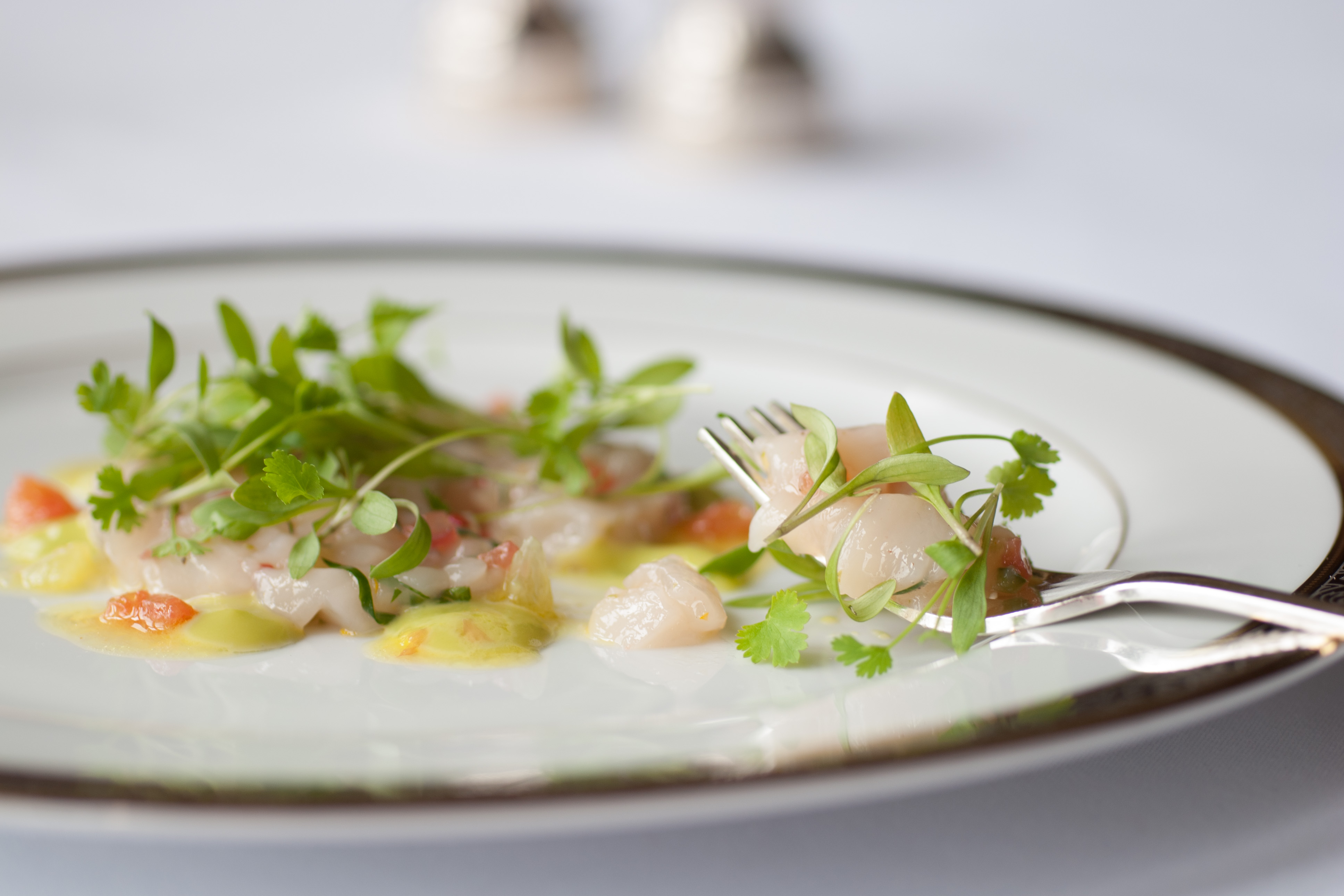 The scallops served at Skibo are all hand-dived in Orkney by Colin Ross and his team. Each diver spends around three hours a day under water, at depths of 20 to 150 feet, selecting only the very best scallops. “Diving for scallops is far more environmentally friendly than traditional dredging,” Colin says. The work is intensive, with each diver bringing in anything between 30 and 200 kilos a day. With most scallops needing at least five years to reach a reasonable size, working in a sustainable way is vital to ensure ongoing supply. Working in the waters where we live makes us all conscious of the need to protect the natural habitat that little bit more.”

At Skibo, oysters from Loch Broom - served simply with shallot and lemon - are a popular Saturday night canape. They are provided by Maorach Beag, a small, sustainable family-run business that cultivates oysters in Wester Ross. In addition to growing oysters for consumption, the company also cultivated oysters for a range of restoration projects across Scotland, including one in the Dornoch Firth. The native oyster population of the firth was decimated in the early 1900s, but  the Dornoch Environmental Enhancement Project (DEEP) - a partnership between Glenmorangie Distillery, Heriot-Watt University and the Marine Conservation Society - has seen the reintroduction of oyster reefs to the firth’s clear waters. 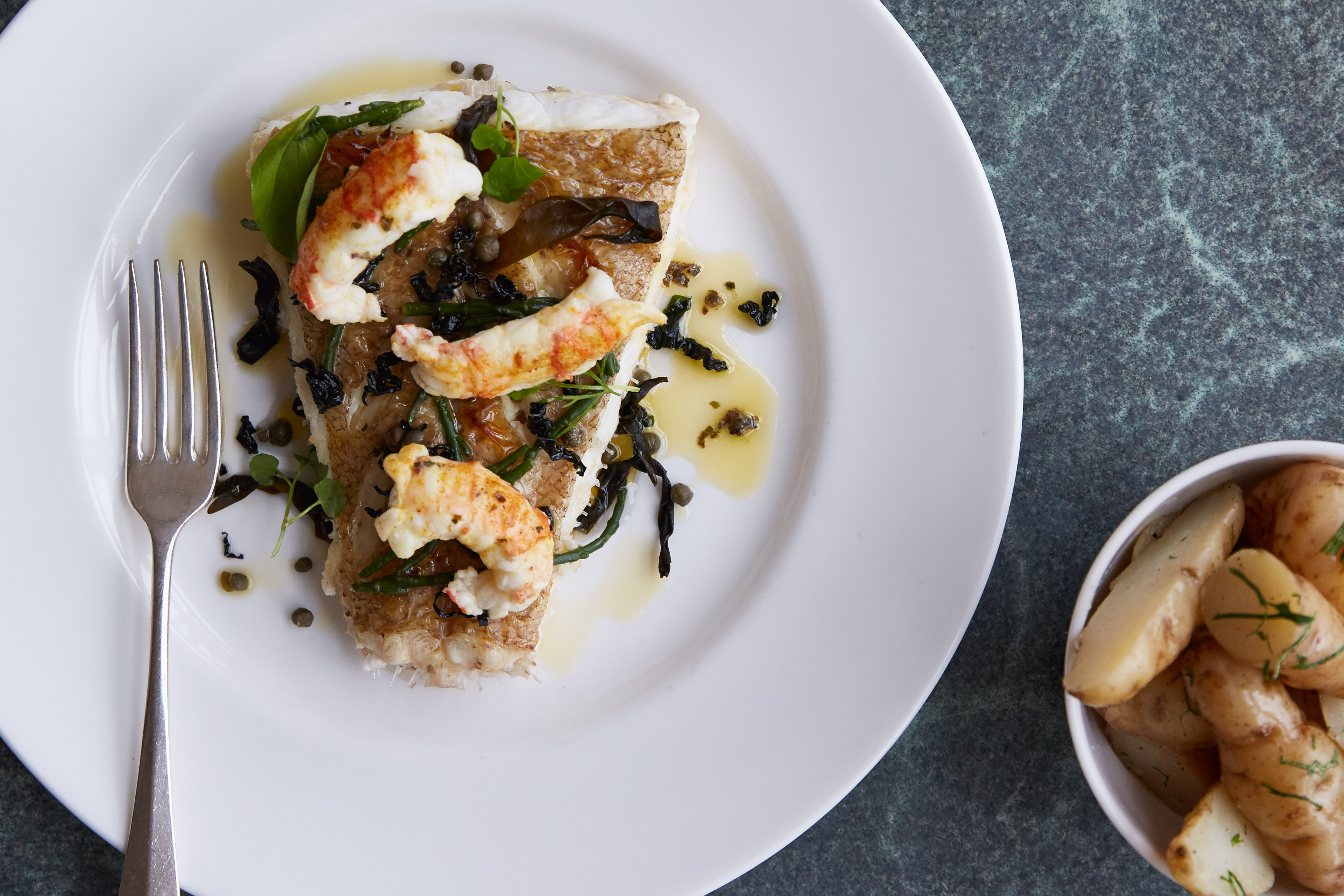 Whether harvested from lochs, hand-dived in clear coastal waters or caught at sea, the fish and shellfish of the Highlands and Islands are rightfully recognised across the world for their outstanding quality. Situated in the heart of this region, the chefs at The Carnegie Club take full advantage of the natural bounty that sits on the estate’s doorstop so that guests at Skibo can enjoy a true taste of Scotland each and every time they visit.

This blog post adapts and updates ‘From the Deep’ and ‘Food for Thought’ from the 2014 and 2017 editions of Skibo magazine. 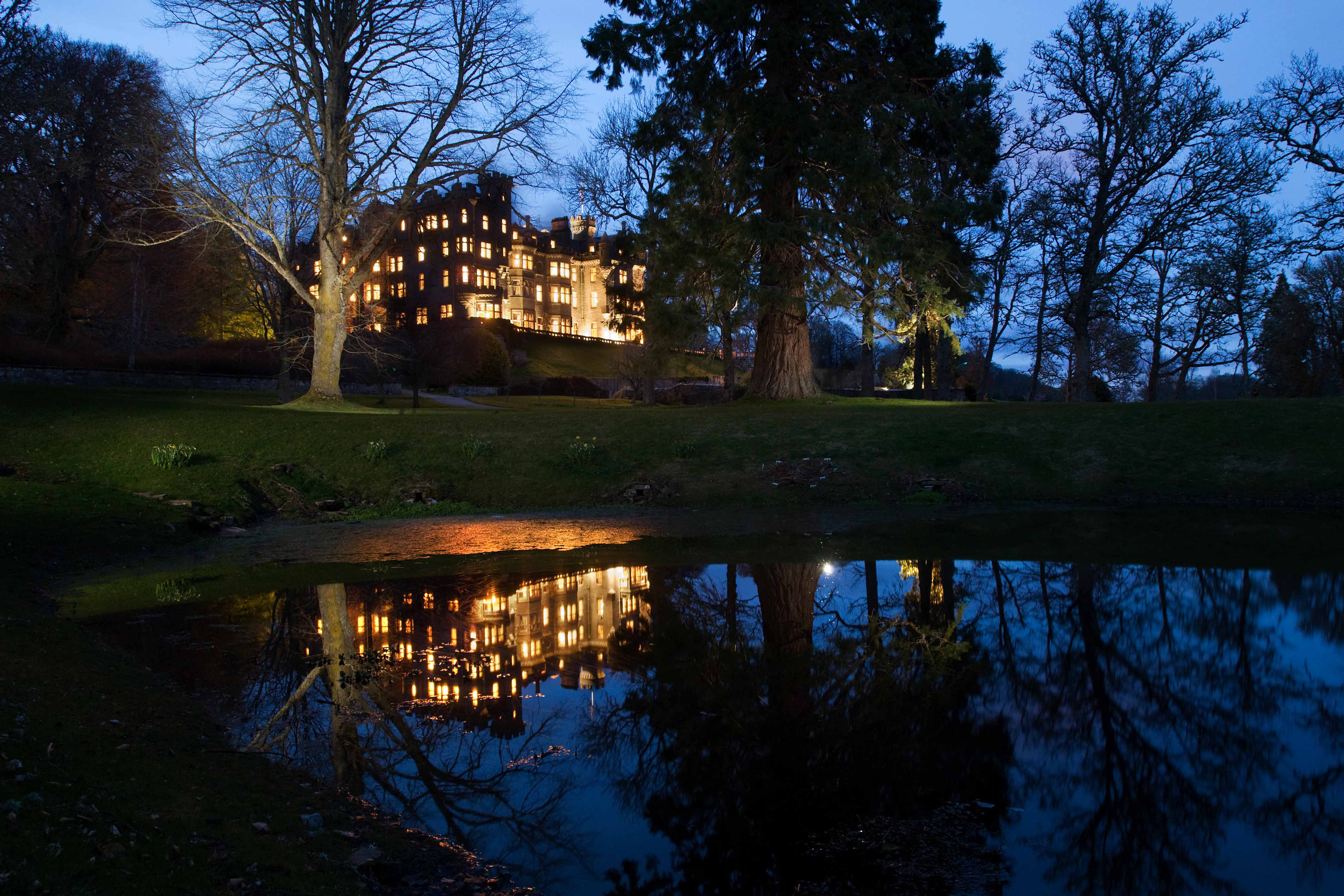 From warding off evil spirits to reading a different kind of leaf than you might expect, we take a look at some of Scotland's Halloween traditions. 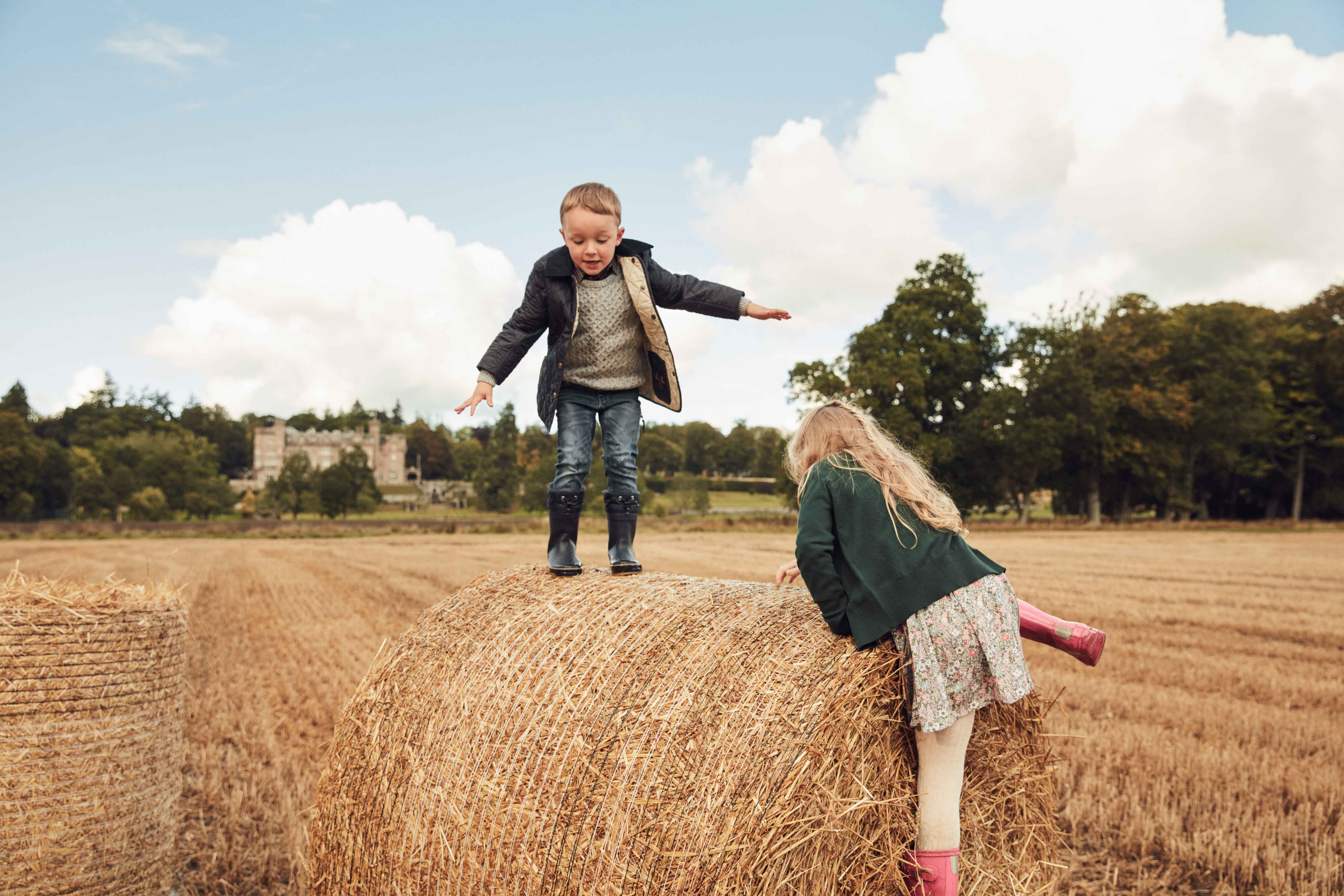 Children at The Carnegie Club

Children receive a special welcome at Skibo with a wide variety of activities to keep them entertained during their stay, and with 8,000 acres to explore Skibo is perfect for families who want to get away from the hustle and bustle of the city and enjoy quality time together in the clear, fresh air of the Scottish Highlands.